Brittany Heist has been with the WNY Flash Academy since 2013, being named the clubs Girls Youth Director in the Summer of 2020. Within those 10 years, she’s created a player-centric coaching style that has been proudly emulated by coaches across the club & Western New York. Her commitment to the game goes far beyond the academy, too, serving as the head coach of the varsity girls soccer team at St. Mary’s High School for the last seven seasons. Under her leadership, the Lancers have soared to incredible heights, capturing three Monsignor Martin regular-season championships as well as two Monsignor Martin A-League Championships in 2019 & 2021 and lastly a NYS Catholic State Finalists achievement in 2021. She additionally earned back-to-back ‘Coach of the Year’ honors in 2018 and 2019.

“I am excited to step into the ECNL Director role at the WNY Flash Academy. Being around the academy since its inception, I have seen first hand the success, growth, and continued development in the WNY region and am looking forward to continuing to build upon what has been established here”

During her time with the club, Heist has experienced local & regional success. She led five different Flash age groups to National Division Thruway League Champions, as well as winning two GLA Championships & leading five teams to their respective Final 4 Weekends. Additionally, in the 2021-2022 season, she led her 2010 Pre-ECNL team to a State Cup Championship & the Regional semi-final, all while continuing to aid Pre-ECNL growth & development at the club with home and away fixtures & club programming.

“Providing opportunities to young, talented coaches is important to us at the Flash, and I couldn’t be happier to see Brittany take on the role of ECNL Girls Director. Since the inception of the Academy, I’ve watched Brittany grow not only as a coach, but as a mentor to so many players that have come through our club. Her impact has been immeasurable with the Flash & the WNY community. I’m excited to see where she takes the program in the coming years” said former Girls ECNL Director, Aaran Lines.

A proven winner, Heist enjoyed unprecedented success at Boston University (2007-11). During her tenure as a Terrier, the program would capture five regular-season and conference championships, appearing in the NCAA Tournament each of those seasons. A two-time All-America East League First Team selection, she would also earn All-Conference Midfielder of the Year and NSCAA All-Region First Team honors. A leader on and off the field, Heist received the Aldo “Buff” Donelli Leadership Award in 2012. Following her collegiate playing career, she went on to serve as a captain on the WNY Flash UWS Semi-Professional team in 2017.

In addition to holding a USSF National “C” License and a United Soccer Coaches 7v7/9v9 Diploma, Heist has a bachelor’s degree in Psychology and a master’s degree in Physical Education and Coaching from Boston University. 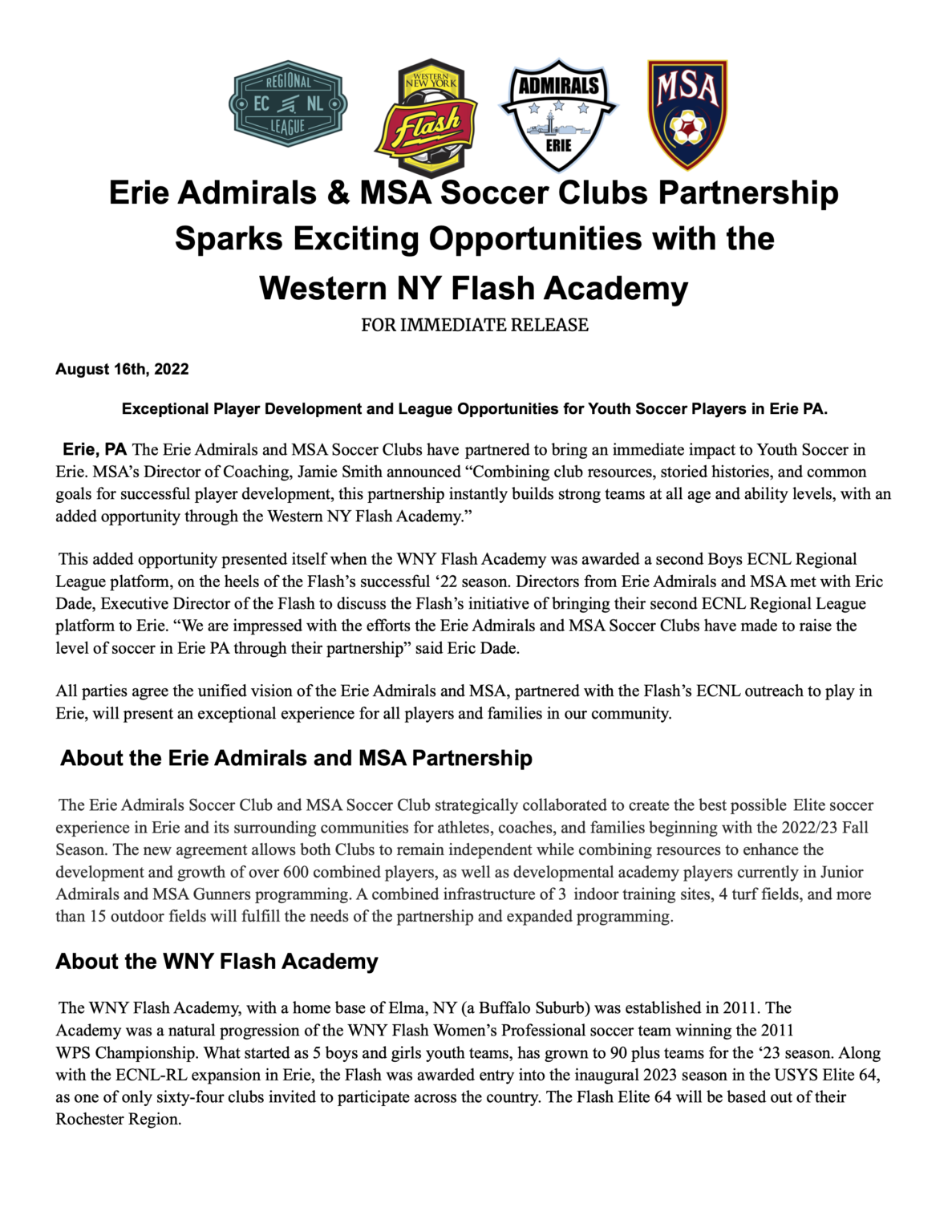 We are incredibly excited to announce the start of the WNY Flash Center of Excellence! This supplemental training program is designed to create technically well-rounded & creative soccer players in the U8 through U14 age groups (Birth years of 2014 - 2008).

Each individually-based training session offers attendees drills including, but not limited to, ball manipulation, 1v1 moves and techniques, both offensive and defensive, speed and movement on and off the ball, and agility. This group training is limited in the number of players to ensure as much individual attention from the coaching staff as possible.

Players can sign up for one, two, or three of the seven (7) week sessions at Epic Center in Williamsville starting this November.

Come join us for this exciting opportunity to challenge your Flash player!